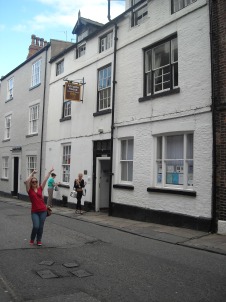 Cassie standing outside of Allington House on the North Bailey in Durham.

As part of our Remaking Beamish project we are planning to recreate a lost coaching inn (look out for an announcement about exactly which inn it will be). While we always use lots of archival research when recreating a building that has both been demolished and disappeared from memory, we are often left with gaps and have to make informed guess. Often, it is the smaller architectural details that are unrecorded, such as window glazing bars and door surrounds, which may seem unimportant but can make all the difference in making a building feel authentic. Sometimes, there are larger chunks missing, such as the rear of a building, which may be out of shot of a photograph. Here it could be an entire facade that we have to make a well founded inference about.

Yesterday Clara and our newest member of the team, Cassie, went in search of some local examples to help fill a few of the blanks that are missing on our design for our coaching inn. We headed to Durham to visit Allington House on the North Bailey, former home of the architect Ingnatious Bonomi, which has been gradually developed and expanded from the 1700s right up to the 1950s. Here we found a hidden Georgian front door with a beautiful classically carved hood canopy, lopsided sliding sashes, 17th century roof trusses and plenty of wonky corridors. 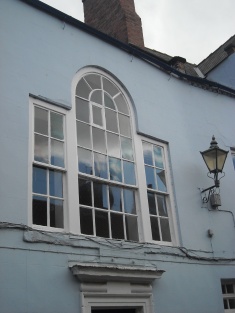 A typical Palladian style Venetian window on a Georgian building in Durham.

The city of Durham itself provided some useful inspiration with all its moulded doorways and Georgian windows with typically distorted glass.

One of the many Neoclassical carved doorway of Durham.